With excitement we travelled as a group of 29 Sasakawa Fellowship Programme students, sponsored by the Nippon Foundation and two members of WMU staff, including Nippon Foundation Chair Dr Aykut Ölçer by train to Kastrup International Airport in Copenhagen to board a plane bound for Tokyo, Japan. We landed some eleven hours later at Narita International Airport and were met with the friendly smiling faces of Shinichi Ishikawa, Sachiko Sumitomo and Miyoko Wada, who would be our trusted and extremely helpful guide until the end of the trip. We were whisked straight from the arrivals lounge out to a bus which took us into the very heart of Tokyo and to the offices of the Sasakawa Peace Foundation for our induction session. Here we were met by even more friendly smiling faces. By the time we reached the hotel the group were beginning to tire. It had been a long day.

After much needed rest we awoke to glorious clear blue skies and bright sunshine. The perfect weather for what was to be such an important day. And what better way to start than going for some lunch? We travelled a little through the city and before long arrived for a buffet lunch. This included some rather sizeable crabs’ legs, which many of the group enjoyed.

After leaving the Nippon Foundation we made our visit to the Ministry of Land, Infrastructure, Transport and Tourism. After opening remarks by Senior Deputy Director Mr Otsubo, the students were given an introduction to some of the activities of the Maritime Bureau and an extensive question and answer session. Augustine Imhomoh gave some words of thanks on behalf of the students.

Rather fittingly the official programme for the day was capped off with the Welcome Reception, held on the 35th floor of the Kasumigaseki building. The weather had remained clear all day and so the views across the city were stunning. The students were able to meet with diplomatic representatives from their countries, WMU alumni and many officials from governments and the maritime industry. As an added surprise, former Secretary General of the International Maritime Organization and former WMU Chancellor, Dr Koji Sekimizu was in attendance and he kindly addressed the reception. The students sang the WMU song, which was very well received. Gustavo Mejia Jovane spoke on behalf of the students before the evening was brought to a close with some words of thanks from Dr Ölçer.

Another day began with bright sunshine and this time a drive out of the city. Our first site visit of the day was to Kashiwa Company, a marine equipment manufacturer specializing in ship safety and environmental protection systems. The students were given an introduction to the products and a tour of the testing facility where they were able to see a test of the high expansion foam system and a high performance firefighting system, which could discharge water a distance of well over one hundred metres. The students were grateful for another extensive question and answer session.

After a quick lunch break, we then went to our second site visit of the day, to the Japan Aerospace Exploration Agency (JAXA) at the Tsukuba Space Center. Here the students were given a tour of the facility and were allowed to view the mission control room. After the official tour was over there was also the chance to see some fascinating exhibits in the museum.

By Wednesday we were beginning to feel rather lucky. It was another beautiful day, the sun once again shining and clear blue skies. Our first visit of the day was to the Ariake Water Reclamation Center. Here the students were given an in depth tour of the museum and facilities, learning about the advanced water treatment systems in use in the city. They were able to see the actual water at different stages, from the smelly brown stuff at the beginning to the clear and odourless liquid at the end.

In the afternoon we visited the Tokyo University of Marine Science and Technology. The students were first given a presentation on the different areas of study and research at the University followed by a tour of the site, including simulator and navigation labs. We were then taken to the Meiji-Maru where we were able to view Emperor Meiji’s cabin from his voyage in 1876.

The morning began, sunny again, with a bus across town to Odaiba, a man-made island in the heart of the Port of Tokyo, which would be the subject of our visit. To begin with the students were given a presentation about the history of the port and some information regarding the layout of present day port operations. We then continued to a boat tour which took us around a section of the Port. This gave the students an opportunity to appreciate and see first-hand the sheer scale of the Port.

From the boat via bus to another form of transport, and this time the world famous Shinkansen or bullet train, which in no time at all had us over 500 kilometres away in the city of Osaka, in the Kansai region. With little time to spare we jumped onto another bus and headed to our second site visit of the day.

This was with the Yanmar Company at their Amagasaki factory. An introductory presentation was followed by a full tour of all the facilities where students were able to see each step of large diesel engine manufacturing, from machining and assembly through to outfitting and testing. Once again the students benefitted from a thorough question and answer session before the visit was over.

This was to be our last day of the official site visits and it began with an interesting visit to the Osaka Gas Company at their Senboku Plant. Our welcome here was terrific with a welcome committee which served us all hot drinks before our programme began. There was so much information to take in, from both the presentation and the tour of the facilities. The students were then treated to a demonstration of the cryogenic properties of liquefied natural gas. A site visit such as this of course would not be complete without many of the students’ questions being answered.

Following lunch we went to the final site visit which was one of the plants of IHI Infrastructure Systems Company, a civil engineering company specializing in the design, fabrication, construction and repair of bridges and other steel structures and disaster prevention equipment. The tour of the Sakai Works, where we were on this afternoon, allowed the students to view the fabrication of large scale steel structures. Of course the students had many questions and at the end of the tour the representatives of the company were more than happy to answer them. Throughout the week the generosity of all of our hosts at each site visit was truly outstanding. Everyone had been so happy to share their knowledge and expertise unreservedly. No question had been left unanswered at any site visit.

With the official site visits complete, Saturday was an opportunity for the group to visit some cultural sites in the nearby city, and former capital, Kyoto. First stop was to the Togetsu-kyo Bridge and Tenryu-ji Temple. The area was full of people, tourist shops and restaurants, yet inside the temple itself everything was tranquil and calm. Behind the temple we were able to walk through a beautiful bamboo forest. Afterwards we went to our second stop at the Kinkaku-ji or golden pavilion temple. Here we were able to see the famous temple, with its top two layers coated in gold leaf sitting in a lake and surrounded by trees and nature.

The week’s activities were rounded off with the Farewell Reception back at the hotel in Kobe. Representatives from maritime organizations in the region were in attendance and were all invited to say a few words on stage. Pamela Dela Cruz Dolina spoke on behalf of the students, thanking all of Japan for the wonderful hospitality we had enjoyed during the whole week. The reception of course would not have been complete without the singing of the WMU song.

Sadly this was now the end of our stay in Japan, with only the drive to Kansai International Airport left the following morning. It seemed like we had only just arrived in Japan. The time had flown by so quickly, but in just over a week we had done so much, visiting so many different organizations all of whom contributed something to what was such a special week. The students didn’t just gain new perspective which would enhance their education at WMU, they also learned about Japan and Japanese culture and it will be these memories that they will cherish for their whole lives. 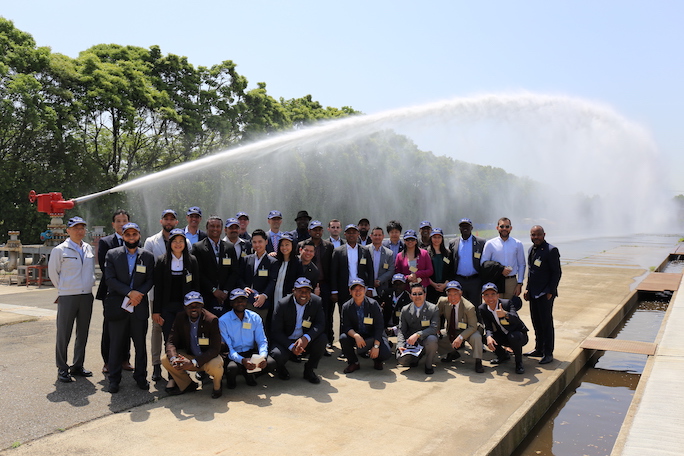 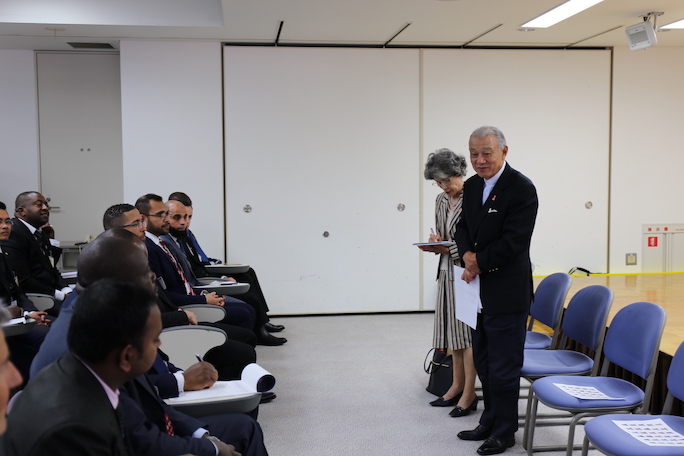 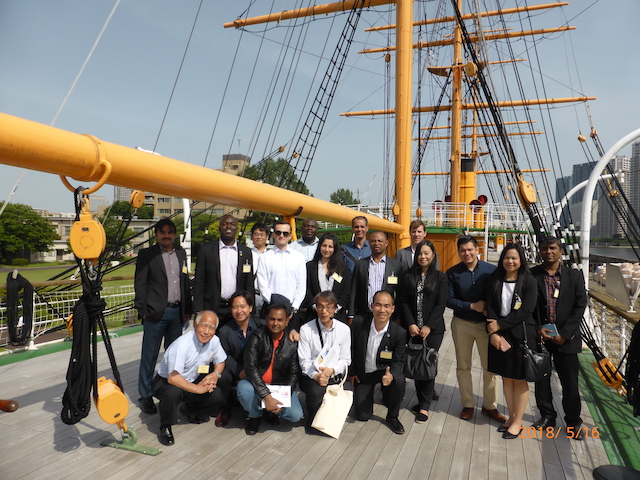 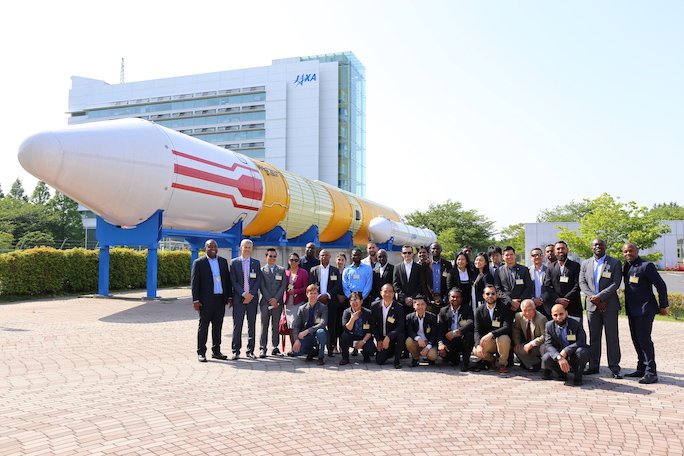 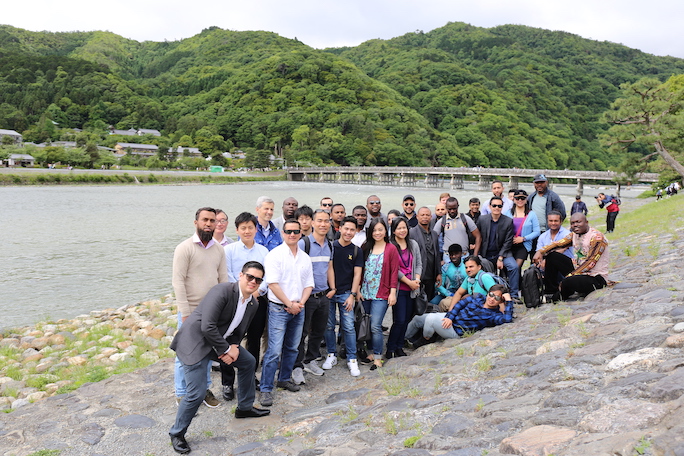 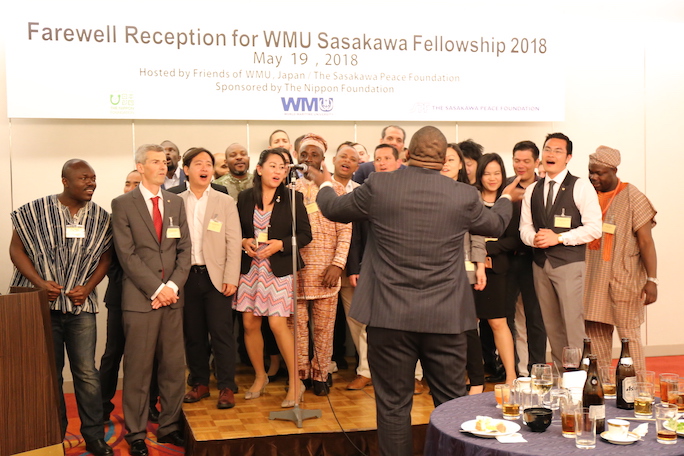