The big day had finally come and on Saturday 11 May, 29 Sasakawa funded students and two WMU staff members, including Professor Laura Carballo Piñero and myself, met at the Central Station in Malmö, to start our journey to Japan. Much to my delight, all the students were there well in time, and we could even catch an earlier train to the airport! Apart from a nerve-wracking change of planes in Helsinki, Finland, where we had very little time to go through security and passport control, the flights went well and we arrived at Narita Airport early on Sunday morning.

Sachi-san, SPF staff member, and our guide, Miyo-san, met us as soon as we came out through the doors so we felt very welcome. After arriving at our hotel, Hotel Villa Fontaine, we had an orientation meeting where we also met Kudo-san and Takeshi-san. Then only a short walk from our hotel, we experienced our first delicious buffet-style lunch in Japan. After lunch we took another short walk to Hamarikyu Gardens and Miyo-san guided us through this beautiful park. Standing in the middle of this amazing park, you could not believe that you were in the center of one of the 10 largest cities in the world. After check in back at the hotel, we had the rest of the day free and we all headed off in different directions to explore Tokyo. Professor Carballo and I very much enjoyed our visit to Asakusa temple and market.

The most important day of the week started with a very nice lunch in a beautiful hotel. After lunch it was time for the courtesy visit to the Nippon Foundation and our meeting with Dr. Sasakawa. He addressed us and we all listened with much interest. The students introduced themselves and Professor Carballo spoke on behalf of the University, while Ms Ward from St Kitts and Nevis spoke on behalf of the students. She noted the generosity of the Nippon Foundation and the wonderful opportunities the Sasakawa Fellowships made available. Despite Dr. Sasakawa’s busy schedule, he very kindly offered to pose for photos with each and every one of us!

After the visit to the Nippon Foundation, we continued to the Maritime Bureau (MLIT), where we were met by the Senior Deputy Director General, Dr Otsubo and his staff. An interesting presentation was made by a WMU graduate, Yasuhiro Urano. Mr Hasanov from Azerbaijan spoke on behalf of the students, thanking the Bureau Staff for the interesting visit.

The first official day in Tokyo ended with a wonderful Welcome Reception attended by WMU alumni, diplomatic representatives and many other distinguished guests. The surprise of the evening was that the Master of Ceremonies was Ms Riko Takahashi, 2019 Miss Japan Marine Day Awardee! A generous buffet was served and the sushi was amazing. Mr Rojas Trillos from Colombia spoke on behalf of the students, expressing their appreciation of the lovely Reception. The students sang the WMU song, accompanied by several of the alumni present.

This day turned out to be the only rainy day during our trip, but luckily, we had all received umbrellas as gifts during the orientation meeting. Today’s first site visit was in Yokosuka-city, which is situated south of Tokyo. We visited the Port and Airport Research Institute and were shown around the various experimental facilities, giving us glimpses of the extensive research work they are involved in.

After our morning site visit, we had lunch on the bus in form of a bento box, which was a new experience for many of us.

The next site visit was to the Japan Agency for Marine-Earth Science and Technology. We were introduced to their many ongoing research projects, among them forecasting earthquakes and tsunamis. We got the chance to see several of their research vessels, also the Shinkai 6500, which is a manned research submersible.

After coming back to the hotel, Professor Carballo and I were kindly invited to join a group of students heading out into the Tokyo night, very skilfully led by our Japanese student, Mr Yuta Arai. Mr Arai tried very hard to accommodate all of our wishes, which was not easy, since we were quite a large group, but he managed successfully. We saw the famous Shibuya crossing, took photos with the statue of Hachiko, shopping at a Daiso – among other things. The night ended at a restaurant with food from the very south of Japan, Okinawa, where the menus were only in Japanese, so Mr Arai ended up ordering for all of us! The staff at the restaurant were amazed that we represented so many nationalities in our group.

Wednesday 15 May – Tokyo to Okayama

We had two site visits this morning. The first one was to Port of Tokyo, where we were invited to the Exhibition room of the Tokyo Waterfront Area. As well as seeing a very interesting exhibition, we also enjoyed an amazing view over the entire Tokyo Port and Tokyo Waterfront Area, from about 100 meters above the ground. A short distance from there, we continued to the National Museum of Emerging Science and Innovation. The main attractions were the Geo-Cosmos globe and the robot called ASIMO.

After the visit to the museum, we had the best lunch of the week, in my view, where the food was as beautiful as it was delicious. The desserts and ice cream had just settled nicely in our stomachs, when it was time to walk to the station and catch the Shinkansen speed train to Okayama. We travelled about 600 kilometres in 3 hours and many of us either rested or were looking at the scenery outside the train windows. We reached Okayama where a new bus was waiting for us, and after driving south for about an hour through the green countryside, we reached our hotel, Hotel Diamond Setouchi Marine Hotel, situated by the beach outside of Tamano.

The hotel served a nice evening buffet and a few retired early, others gathered at the beach and some of us took a relaxing stroll on the beach walk.

Thursday 16 May – Tamano/Okayama to Kobe

Today’s morning site visit was not far from our hotel, Mitsui E&S Holdings Co. Ltd., Tamano Works, which is a huge shipbuilding company. We were shown around their fascinating facilities, looking at various assembly shops and even boarding a vessel that was under construction.

We continued to Okayama Gakugeikan High School and we were divided into small groups to talk to two or three students each. After presentations by both the rector and students, we had lunch together in the class room, we with our bento boxes and the students their home made lunches, nicely wrapped in Furoshiki wrapping cloths. Ms Al-Mahariq from Jordan thanked the School on behalf of the students. The local media was present and we also took a huge group photo, with the photographer balancing at the top of a ladder! All the students then followed us out to the bus and waved at us until we could no longer see them. We also experienced this tradition at other site visits – the “10-minute goodbye wave”, as Miyo-san called it.

The afternoon was rounded off with a visit to Hinase Satoumi Research Institute, where we were given a very interesting presentation of their research work, followed by a boat trip in the sun, enjoying glittering water and beautiful surroundings.

Now it was time to continue to Kobe and after a couple of hours’ bus ride, we arrived at our hotel, the ANA Crowne Plaza Kobe. After check in and collecting our main luggage which had been sent ahead from Tokyo, Professor Carballo and I were invited to join our Japanese hosts for dinner. It turned out to be one of the best evenings – and finally I got to try the sweet potato sake!

Our Friday morning started early with the excellent buffet breakfast at our hotel, after which we took a short bus ride to Nippon Maru, which is the training ship for Japan agency of Maritime Education and Training for Seafarers. We were divided into groups and were guided around the ship by cadets.

We proceeded from there to Sasakura Engineering Co in Osaka, which is not very far from Kobe. Here, as at all the places we had visited all week, we were received warmly and in a very organized manner. Seawater desalination and noise control were the main topics during the visit. We also took a group photo in front of the premises together with quite a number of their staff members.

The afternoon was free for us to explore Kobe on our own. We had received a tip from a colleague at WMU, so Professor Carballo, Sachi-san and I took the ropeway (cable car) up the mountain behind our hotel to visit the Kobe Nunobiki Herb Gardens. We walked through beautiful gardens, had lunch with a stunning view of Kobe, tried lavender-flavoured ice cream, rested in hammocks and then walked all the way down to the hotel again, with a stop at the waterfalls on the way down.

A farewell reception was held for us in the evening, with many distinguished guests and it was a great opportunity for us to mingle with WMU and SPF friends, WMU graduates and with the other guest. The students sang the WMU song, conducted by Mr Ijabiyi from Nigeria, who also gave the farewell speech on behalf of the students.

Today was dedicated to sightseeing in the beautiful surroundings of Kyoto. We started with visiting Arashiyama, on the west side of Kyoto. There we saw the Togetsu-kyo Bridge as well as the Tenryu-ji Temple, one of the headline attractions. We also passed Nonomiya Shrine before entering the bamboo forest. The light here is amazing and if it wasn’t for the crowds of tourists, you would think you were in another world! The group split up after the bamboo forest, where Professor Carballo and I decided to visit the Jojakko-ji Temple, a very peaceful place far from the crowds with a lot of stairs to climb. It was a stunning place, so it took us some time to walk around, which resulted in us not finding time to eat lunch – we settled with a soft ice cream, with flavours of bamboo and cherry blossom, green and pink!

We continued with a visit to Kinkaku (the Golden Pavilion), officially known as Rokuon-ji Temple, situated in a beautiful garden next to peaceful pond and registered as a World Cultural Heritage Site since 1994. We ended our sightseeing tour with a visit to the Garden of Heian Jingu Shrine, which was yet another scenic experience, with ponds full of waterlilies and turtles.

After coming back to the hotel, Professor Carballo and I joined a group of students in exploring the night life in Kobe as well as finding a place to have dinner. We eventually ended up eating at a restaurant where you order the food and drinks through an ordering machine, before you take a seat, and the food is brought to you to the table. The sukiyaki I ordered tasted wonderful, especially after only having ice cream for lunch…

A sad day – we had to leave this beautiful country which we had enjoyed for an entire week. I will miss the friendly and polite people of Japan and the fascinating culinary and cultural experiences that the field studies had given us all. Japan offered us all such a varied experiences: from historical treasures, to hi-tech cutting edge research, from delicious and beautiful food, to wonderful natural landscapes. We are so happy to know a little more about this fascinating country and its culture. 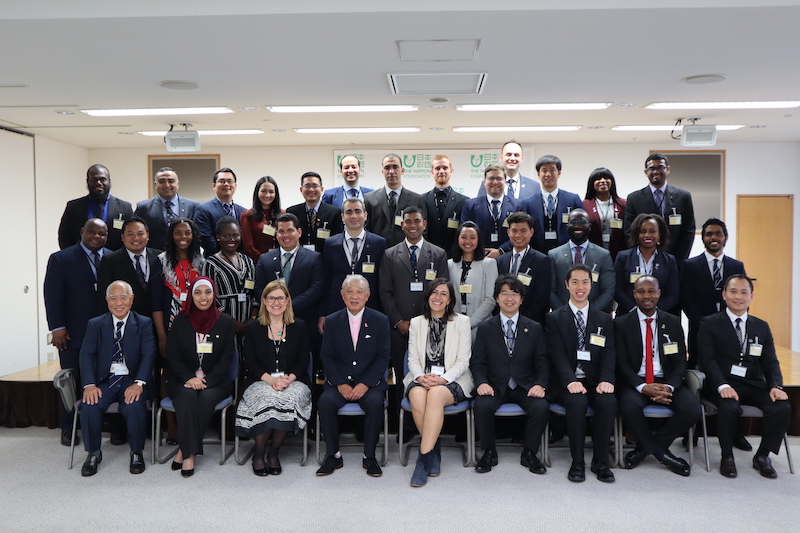 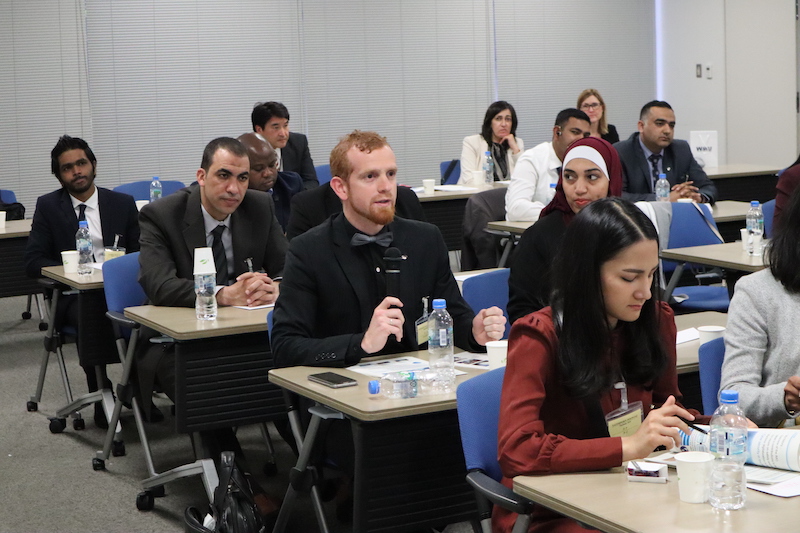 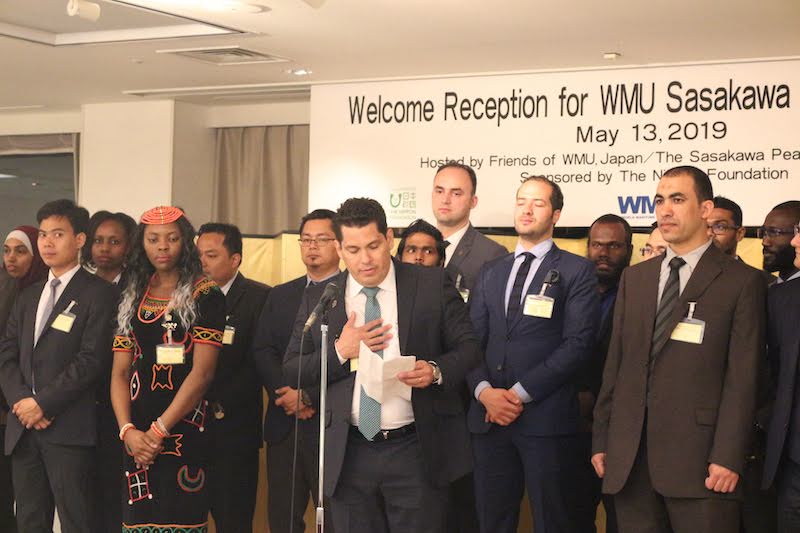 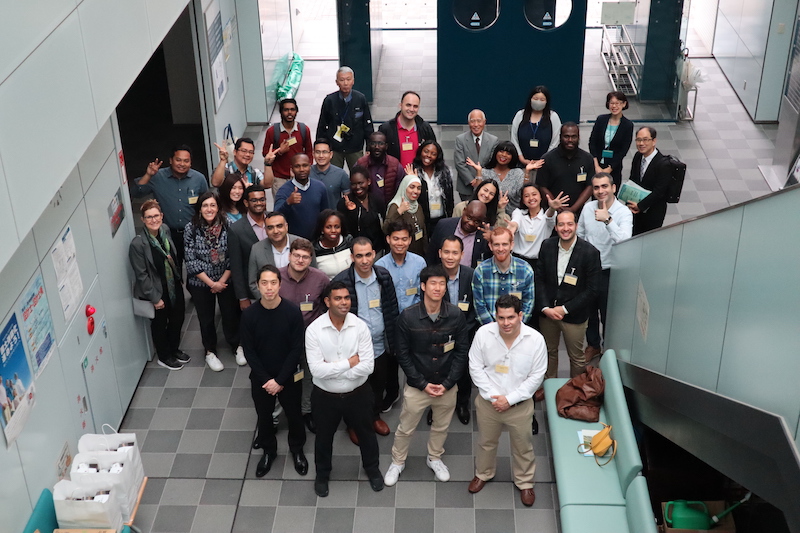 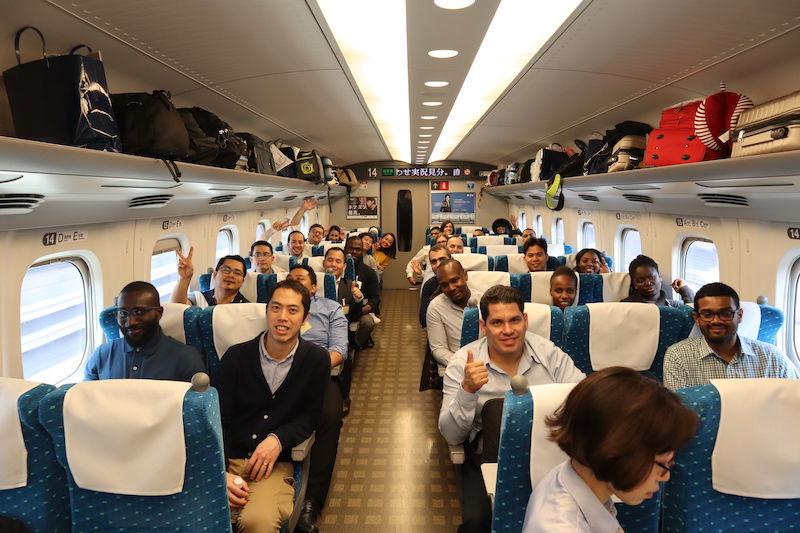 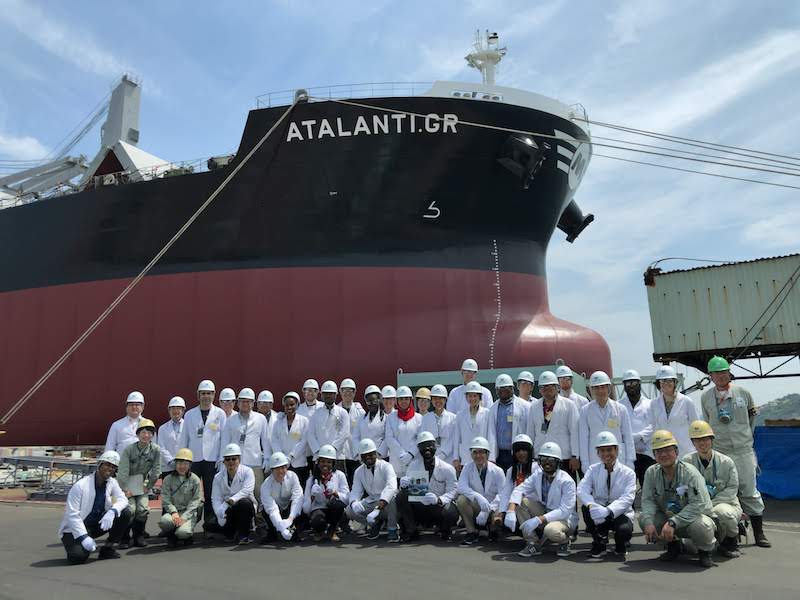 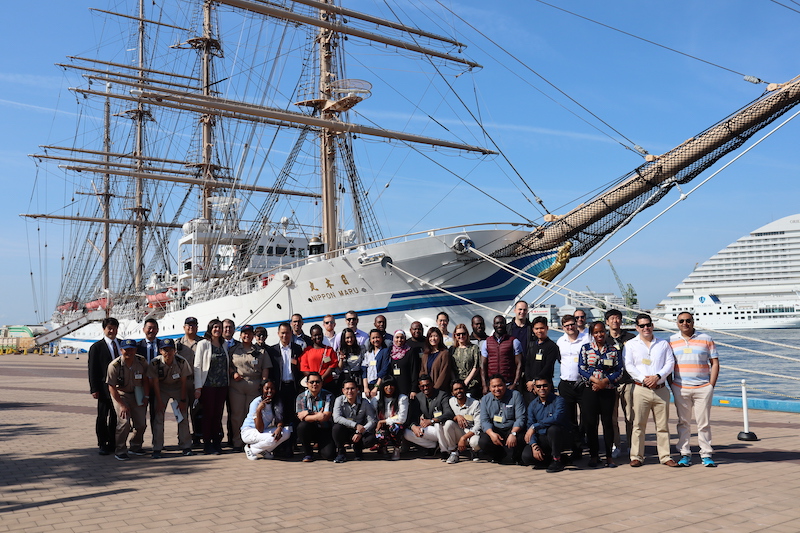 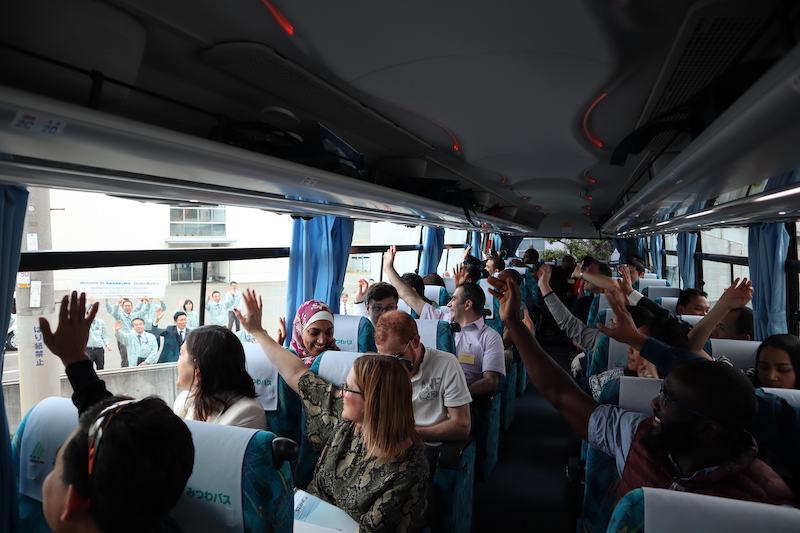 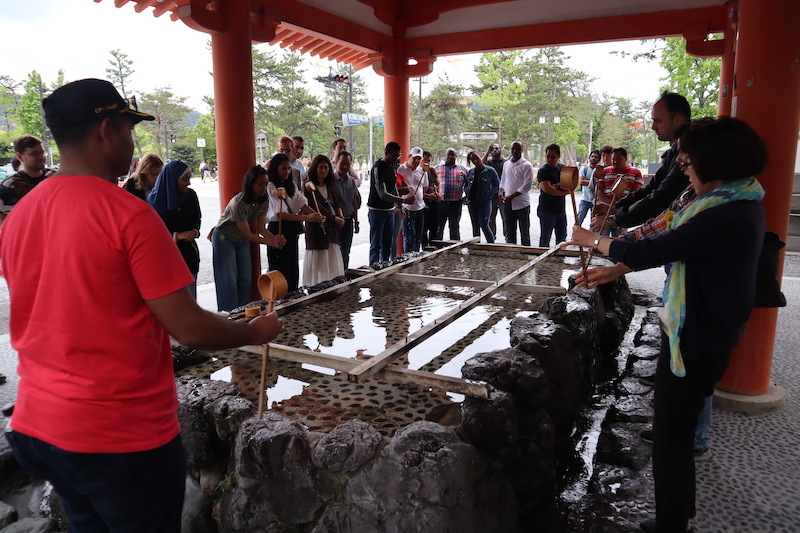 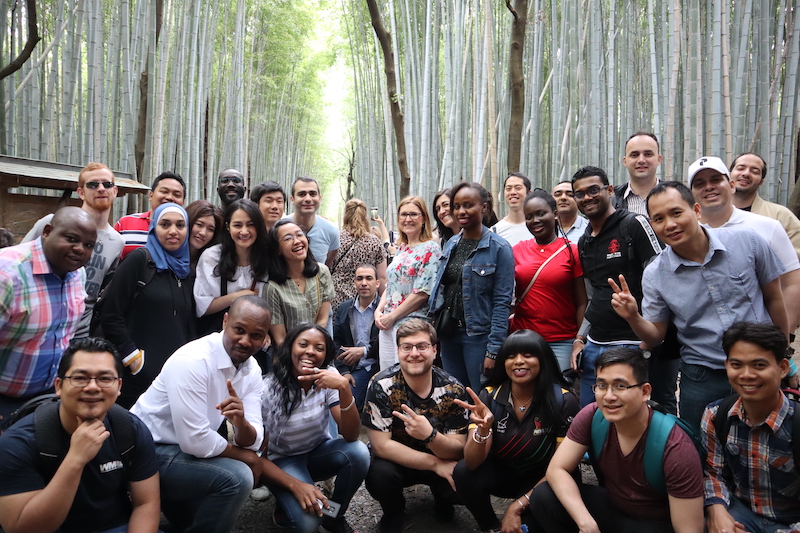